7 Days of Kwanzaa. 7 Excerpts from Chapter 3 of a forthcoming essay series, “#CELEBRATE: Meditations on a Black Festive Culture.”
Day 2. Kujichagulia 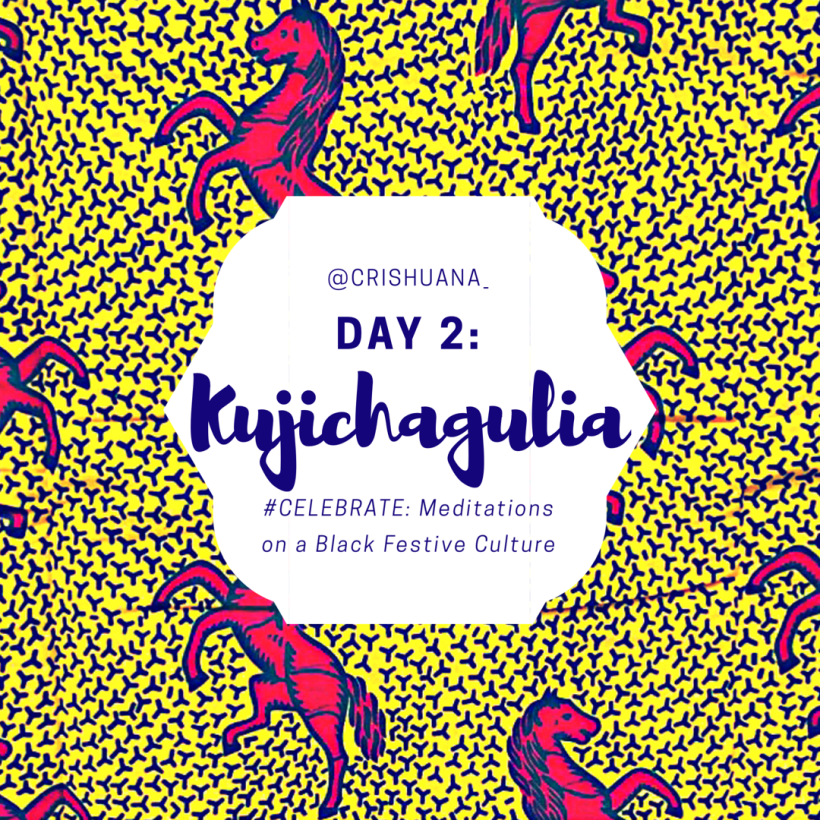 / We don’t borrow
from Africa,
we utilize
that which was ours
2 start with.
The culture
provides a basis
4 revolution
+ recovery. / -Maulana Karenga

Like black holidaymakers before it, this twentieth century holiday tradition struggled with questions of legitimacy.

Explicitly targeting the calendar as a site of spatial negotiation, the creators of Kwanzaa and the Black Protest Calendar recast American holidays as white-centric extensions of Jim Crow exclusion. The New Black Power consciousness shifted from the patterns earlier black holidays established in the Antebellum and Progressive Eras. Black Power era holidays demanded recognition of the Afro-centric experience first and instead, created traditions around the ways mainstream white culture had failed it. The Black Protest Calendar sought to commemorate that fact that blacks were still not fully equal citizens instead of tacking their experience on to America’s mythology. They aimed to present celebrations that intentionally exposed how America’s freedoms and claims of morality were both false and ahistorical. You see, Kwanzaa was not rooted in a historical moment, but was a deliberate Black Nationalist response to their inability to identify with the cultural narrative of American festive calendar. Kwanzaa was created to be and still is, an active criticism of mainstream American celebrations.

Beyond creating observances which challenged white holidays, the Black Protest Calendar based its memory  building on cultural events more relevant to the emerging consciousness. Progressive era and Antebellum black celebrations primarily included personality holidays such as Booker T Washington’s Birthday, Ida B Wells Day and a day for Frederick Douglass. Black Nationalists aimed to update these observances to include recent traumatic events, while continuing the tradition of celebrating race heroes. For example, the Black Protest Calendar includes observances for the assassinations of Dr. King and Malcolm X.

The second aim of this expression of the Black Holiday Tradition was to place “anti-holidays” alongside mainstream holidays, challenging the inclusivity of American celebrations, including Thanksgiving, Election Day and, Columbus Day. But, most significantly for  understanding Kwanzaa was that the BPC reincarnated a Pan-Africanist consciousness into the existing black holidays. Freedom Day was abandoned as the original observance. Emancipation Day was resurrected as a celebration of black freedom which was now aligned with African independence struggles against colonialism on the Continent.

Foundations of Kwanzaa can be said to have seeded in 1970 and 1971, when community organizer Edward Simms, Jr. created a Black Nationalist holiday called Umoja Karamu. Umoja Karamu was an attempt to renegotiate Thanksgiving. By holding it on the Sunday after Thanksgiving, the holiday became a way to reverse the “misgiving” of the holiday. It was also a holiday of feast and family, but it challenged European ideas of unity and proposed a more Afro-centric understanding. The celebration promoted harmony and was based on five major historical periods in the black American experience. During the feast, families presented historical readings, honored ancestors and shared foods that represented the five colors linked to the five historical periods. This pattern germinates in another Black Nationalist holiday established in this period: African Liberation Day. Founded by the great Kwame Nkrumah in 1958, it was adopted in America in 1963. By the 1970s, was considered to be one of the most widely celebrated black holidays on the calendar. Though it was African in its foundation, upon its adoption by newly Afro-centric Americans, it maintained the Protest Calendar tradition of American holiday critique. It is observed on the May 27th date, placing it right next to Memorial Day. This date placement was a direct challenge to American commercial and military involvement with oppressive colonial governments on the Continent.

It is no wonder Kwanzaa is such a powerful expression of black American creativity because Maulana Kerenga, Kwanzaa’s creator and leader of the US organization in the late 1960s lived as a reinvention himself. During the Black Power era, “cultural recovery” was not simply at the holiday level, but it was also manifested in individuals who strived to embody the Afro-centric ideals of the era. Born Ronald McKinley Everett, he changed his name to a more “authentically African” name. Similarly his careful study of Swahili and Arabic showed that he, like, Paul Robeson before him, believed that African languages were a deep source of cultural pride and knowledge. Kerenga went on to earn multiple graduate level degrees in Swahili and African cultural studies. Author of Kwanzaa: Black Power and the Making of the African-American Holiday Tradition, Professor Keith A. Mayes refers to this process as cultural recovery, which he describes as, “The mere fact that “African-ness” had to be recaptured, re-donned, re-inculcated, and re-received meant that “Africa” at the level of geography, identity and consciousness had to be invented or re-invented by black Americans for black Americans.” For Mayes, Kerenga’s redefinition is inseparable from his political ideologies and invention of Kwanzaa.
Performing Black Nationalism was inherent in his expression of self-identity.

Sending you many blessings, family &