7 Days of Kwanzaa. 7 Excerpts from Chapter 3 of a forthcoming essay series, “#CELEBRATE: Meditations on a Black Festive Culture.”
Day 5. Nia 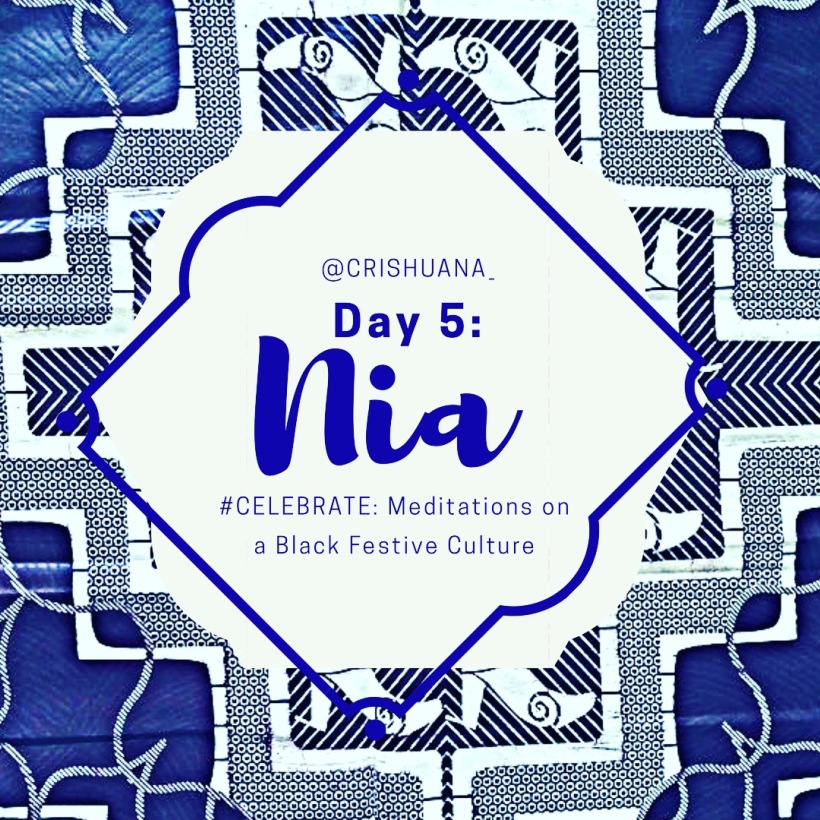 We don’t borrow
from Africa,
we utilize
that which was ours
2 start with.
The culture
provides a basis
4 revolution
+ recovery. / -Maulana Karenga

With Kwanzaa, questions of ownership and representation by Blacks and Of Blacks are reconstructed as was the case for the original Emancipation Celebrations. As in previous black holidays, Black Americans hoped that one of the many commemorations on the calendar would make them culturally visible on the national level as had other white immigrant holidays had done. After repeated disappointments, they found the exclusion disappointing. There were certainly enough opportunities. On February 1st, 1948, the bill signing National Freedom Day as a nationally recognized holiday was put into law commemorating the Thirteenth Amendment against the backdrop of the MLB’s acceptance of Jackie Robinson.

Carter G. Woodson’s Negro History Week become a month long observance at the national bicentennial celebration in the mid-1970s. The adoption of Negro History Month was challenged by blacks as too commercialized and no longer representative of the current desires for an African Heritage Month in August. The third publicly recognized black holiday came immediately upon Dr. King’s death. A resolution was introduced to nationally commemorate the assignation with House bill to designate his birthday on January 15th as a “legal public” holiday. Resultantly, celebrations caused conflict with those, who believed Malcolm X deserved an and innovative overdue for a similar celebration on May 19th. Dr. King’s holiday was mainly advocated for by politicians and by mainstream civil rights organizations and leaders.

The hostile response of the US government caused the decline of Black Power nation-wide at the end of the 1970s, but Kwanzaa’s enormous publicity campaign in black urban neighborhoods represented the continued relevance of the cultural movement in at the local community level. Local Kwanzaa community organizing served as cultural educational sites, often by way of parades, community workshops and neighborhood forums. The grassroots structure re-positioned the black media as once again integral to sharing information. Both movement and non-movement sympathizers disseminated promotional coverage generated by black newspapers and magazines.

Black TV personalities began morning shows with the Nguzo Saba seven principles. Essence, Ebony and Jet magazines produced elaborate spreads about Kwanzaa. Pre-ceremonies even developed in some expressions for the earlier weeks of December before the first day of Kwanzaa. Often these ceremonies were held to help educate and de-mystify the holiday and these ceremonies provided an access point for blacks that did not interact with the local black nationalists organizations. From these points of nexus, the anti-Christmas rhetoric was soon dropped as it hindered prominent black religious leaders and their communities from participating and promoting the cultural exchange.